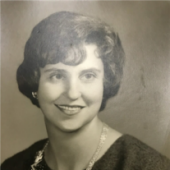 On August 1st at 7 AM, Wanda Mae Sergent, 84, passed onto her heavenly home after a lengthy illness. Wanda was born in Dry Creek, WV and had been a long-time resident of Beckley, WV, Nags Head, NC and finally Ripley, WV. She was born on March 14, 1934, the daughter of the late Joe and Cressie Mae Cantley. She was preceded in death by her husband of 59 years Eddie Eugene Sergent and sister Velma Marie Cantley. Wanda is survived by her daughter, Melinda Marie Knotts (Steve) of Ripley, WV and son Charles Edward Sergent (Pamela) of Chesapeake, VA, grandchildren Chelsea and Bradley Knotts, Jordan and Taylor Sergent; brothers, Ernest Cantley (Betty) of Palm Coast, FL and Charles Cantley (Peggy) of Barboursville, WV. Wanda grew up in Glen Daniels, WV and attended Trap Hill High School, followed by Kanawha Valley Hospital School of Nursing, graduating in 1955. She worked at Beckley Hospital as a surgical nurse and nursing supervisor, Director of Nursing at Pine Lodge Nursing Center, Beckley and Director of Nursing at Senetra Nursing Center, Barco, NC. She moved to Nags Head, NC in 1990 and returned to WV in 2004 to Ripley, where she resided until her death. Wanda attended the Ripley Baptist Temple with Eddie regularly until health issues prevailed. Services will be held at the Ripley Baptist Temple on Monday, August 6 at 12:30 PM with Pastor Rick Perrine officiating. Burial will follow at Donel C. Kinnard Memorial State Veterans Cemetery. Visitation will be from 12:00 to 12:30 PM. In lieu of flowers, donations can be made to Jim Franklin Ministries, “Songs In The Night”, PO Box 380355, Murdock, FL 33938.
Online condolences may be left at www.calfeefh.com.
Arrangements by Calfee Funeral Home, Beckley.
To order memorial trees or send flowers to the family in memory of Wanda Mae Sergent, please visit our flower store.