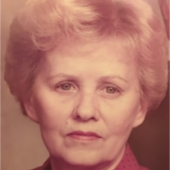 Virginia Minter Pugh, 89, of Beckley passed away peacefully on Easter Sunday, March 27,2016 surrounded by members of her family.
Virginia Weston was born on June 27, 1926 in Frances, West Virginia, the daughter of the late A.K. Minter and Sue Naysmith Minter. Early in her life the family moved to Beckley where she remained the rest of her years.
She was educated in the Raleigh County School system and graduated from Woodrow Wilson High School where she was involved in various extracurricular activities, including being a majorette in the Flying Eagle Band. Following her graduation from Woodrow Wilson she enrolled at the University of Kentucky where she received a Bachelor of Arts degree in 1948. During her senior year at Kentucky she met the love of her life, Emmett S. Pugh Jr., whom she would marry on September 21, 1949.
Emmett and Virginia set up housekeeping on Lancaster Street in Beckley where she lived until her passing. Virginia Weston taught school for one year at Shady Spring High School before she and Emmett began to raise a family.
Virginia participated in many activities during her lifetime. She was a charter member of the Phymosia Garden Club holding various offices; a member of the Junior Department of the Woman’s Club of Beckley; a member of the Woman’s Club of Beckley; the Lincoln Grade School PTA; the Early Bird Bowling League; the Nine Hole Women’s Golf Group at Black Knight Country Club; the Administrative Assistant to the President of the West Virginia Garden Clubs, and other activities too numerous to mention. She and Emmett spent many a summer camped out at Beckley Little League and the Beckley Babe Ruth League watching her boys play ball. She also was involved in daughter Beth’s cheerleading. Many summer weekends were spent at Flat Top Lake taking in the lazy days of summer. Virginia also enjoyed several cruises with family and friends.
Virginia Weston was a member of the United Methodist Temple in Beckley. During the 1950’s she participated in the Church choir and the Women’s Circle Group.
In addition to her parents she was preceded in death by her loving husband, Emmett S. Pugh Jr. in 1993.
Survivors include three children: Lex Pugh and his wife Robin of Charlotte, North Carolina; Beth Pugh Livingston and her husband Rutledge of Hendersonville, North Carolina; and Emmett S. Pugh III and his wife Linda of Beckley. Virginia is also survived by a brother, A. K. Minter Jr. and his wife Shirley of Beckley. She also leaves behind seven grandchildren: Charlie, Julie, Michael, Robert, Jane, Charity, and Stephanie along with seven great grandchildren: Sara, Mason, Carolyn. Christopher, Andrew, Reece, and Emilia.
A celebration of her life will be held on March 31, 2016 beginning at 2:00pm at Calfee Funeral Home on South Oakwood Avenue. Reverend Randy Adkins of the United Methodist Temple will conduct the service. She will be laid to rest at Sunset Memorial Park next to her beloved husband.
Friends may gather with the family from 6:00pm till 8:00pm Wednesday evening March 30, 2016 at Calfee Funeral Home.
The family would like to thank an extraordinary group of ladies who provided care for our mother during her last months. Cyndi O’Neal, Mary Calloway, Vicki Oliver, and Audrey Saddler went above and beyond to provide her comfort and friendship during her illness. Also many thanks to Hospice of Southern West Virginia. Their professionalism and compassion will not soon be forgotten. They are a tremendous resource for families in need.
Memorial contributions may be made to either Beckley Area Foundation, or Hospice of Southern West Virginia.
Pallbearers will be: Rob Rappold, Gary Sutphin, Steve Lickliter, Bill File III and Tom Cochran.
On line condolences may be left at www.calfeefh.com.
Arrangements by Calfee Funeral Home, Beckley.
To order memorial trees or send flowers to the family in memory of Virginia Minter Pugh, please visit our flower store.