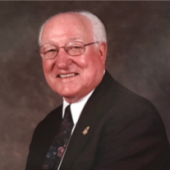 Vernon Franklin Barley, 84, of Maple Fork went home to be with the Lord Tuesday, February 27, 2018. Born January 18, 1934 in Calloway, WV, he was the son of the late Ernest Joseph and Ethel Frances Barley. Besides his parents Vernon was preceded in death by his brothers, Robert Lee Barley and Samuel Ray Barley and sisters-in-law, Karen Barley and Anna Barley.

Mr. Barley retired from the Air Force after 21 years serving in the Korean Conflict and Vietnam War. He served as Crew Chief on B-47 Bombers and taught Aircraft Maintenance at Chanute Field, IL and Seymour-Johnson Air Force Base in Goldsboro, NC. After retiring from the Air Force he was owner and operator of Barley’s Drive Inn in Bradley from 1972-1978. He served from 1978-1982 in the WV House of Delegates. He was elected to the Raleigh County Commission in 1982 where he served three terms. Vernon also served on the Raleigh County Airport Authority, Raleigh County Recreation Authority, Rural Acres Health Clinic Board, was past Master of Mt. Hope Masonic Lodge, member of Scottish Rites, Royal Arch Chapter, past Grand Patron of the Order of Eastern Star of the state of WV, member of American Legion, past member of the American Red Cross Board of Directors and finance committee and Bradley Lions Club. He served two years on the WV State Parole Board and was the first chief of the Bradley Fire Department and Board of Directors. He was a member of Maple Fork Baptist Church and Gideon’s International.

Funeral services will be 12pm, Saturday, March 3, 2018 at the Robert Barley Youth Center, Maple Fork Baptist Church, 1288 Maple Fork Rd., Mt. Hope, WV 25880, with Pastors Jim Bowyer and Rick Metrick officiating. Burial will follow at Blue Ridge Memorial Gardens. Friends may visit with the family Friday, March 2 from 12-2pm with an Eastern Star service at 1:30 pm, 5-8pm and one hour prior to the service Saturday at the Youth Center.