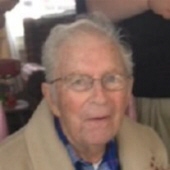 Troy Henderson, 90, of Glen Daniel, passed away Saturday, August 30, 2014. Born April 3, 1924, he was the son of the late Clint and Chessie Marie Tabor Henderson. In addition to his family he was preceded in death by a son, Eddie Henderson, a brother, Vern Henderson and a sister, Cleo Newman.
Troy was a former miner and veteran of the U.S. Navy. He was a member of Cove Creek Community Church, Veterans of Foreign Wars and the UMWA. He loved to sit on his porch and spend time with his family.
Troy is survived by his wife Norma Jean Burleson Henderson; son, Robert Henderson and wife Janie of Glen Daniel; daughters, Kathy Henderson Romero, Karen Henderson Morgan and husband Archie and Sundee Henderson and husband James Healy all of Virginia; daughter-in-law, Meta Jo Henderson Belcher of Glen Daniel; grandchildren, Chad, Shelley, Jennifer, Clint, Bobby, Jason, Ashley, Justin, Travis, Kieran and great grandchildren.
Funeral services will be 1:00 p.m. Tuesday, September 2, 2014 in the Calfee Funeral Home Chapel with Pastor Wallace York officiating. Burial will follow in the Henderson Family Cemetery at Glen Daniel. Friends may visit with the family one hour prior to services on Tuesday.
Family and friends will service as pallbearers.
The family suggests memorial contributions be made to Cove Creek Community Church, C/O Danny Harvey, 1285 Pine Branch Rd., Saxon, WV 25180
On line condolences may be left at www.calfeefh.com.
Arrangements by Calfee Funeral Home, Beckley.
To order memorial trees or send flowers to the family in memory of Troy Henderson, please visit our flower store.