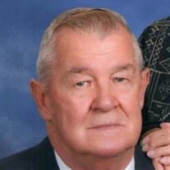 A lifelong resident of Beckley, Tom was born on August 27, 1937. He was the son of the late Steve E. Pachuta and Retha Ardath Thompson Pachuta. In addition to his parents, he was preceded in death by a brother, James Edward and a sister, Frances Ann Lomax.

He was a 1955 graduate of Woodrow Wilson High School and a 1971 graduate of Morris Harvey College. Tom was associated with the automobile business in Beckley his entire life. He was employed as the Leasing Manager at Grady Whitlock Ford for over 35 years, and later, as owner of T&M Leasing and Rental Company.

A funeral liturgy will 11:00 a.m. Monday, August 3, 2015 at St. Francis de Sales Catholic Church with the Reverend Monsignor Samuel Sacus officiating. A rite of committal and burial will follow in the Saint Sebastian Catholic Cemetery. Friends may visit with the family from 6-8 p.m. Sunday August 2, 2015. at Calfee Funeral Home, Beckley. A prayer service will be offered at 8:00 p.m. led by Rev. Mr. Don Wise.

Honorary pallbearers will be the Knight of Columbus of the Father John Halpin Council. Military Honors will be conducted graveside by WVARNG Honor Guard.