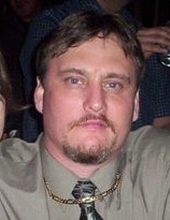 The family of Thomas Dean Goodson, Jr of Midway, WV, is saddened to announce his passing on February 15, 2022, at the age of 54, from a short illness. Born on December 31, 1967, in Elyria, OH, he was the beloved son of the late Thomas Dean Goodson Sr. and Emma Jean (Hunt) Goodson.

Thomas grew up in Midway, WV, and attended local schools. He worked various jobs as a concrete finisher and roofer in Florida and North Carolina before returning to WV and working as a general laborer until retiring disabled. He enjoyed riding his ATV, camping, and listening to music. His greatest enjoyment came from riding Harley motorcycles with his best friend, Patrick Lyall.

In addition to his parents, he is preceded in death by his brother, William Douglas Goodson, and his sister, Pamela Kay Toler and both paternal and maternal grandparents.

Affectionately known as “Tommy”, he is survived by his sister Kim Yow of Statesville, NC; brother Bobby Goodson of Beckley; special nephew Steven Toler of Beckley; special cousin Robert Goodson and his wife Joannie of Texas; special friend Henry Parker of Sophia who took care of Tommy in his final days; special friends Patrick Lyall and his wife Tana of Pax, Roger Stables and his wife Paula of Midway, and several aunts, uncles, cousins, nieces and nephews. Tommy is also survived by his truelove and sweetheart of 26 years, Karan Rahall of Beckley who he affectionately referred to as his forever soulmate. He will be greatly missed by his dog, Ziggy.

A graveside service will be 12 noon Tuesday, February 22, 2022 at Blue Ridge Memorial Gardens.