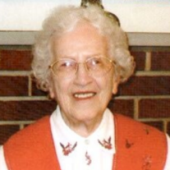 Theresa Mary DellaMea, 100, of Beckley, entered into eternal life on December 31, 2016. Born August 20, 1916 in Winding Gulf she was the daughter of the late Emanuel and Providenza Mirsola Amato.

Theresa was a lifelong member of St. Francis deSales Catholic Church. She was very active in the church and a member of the choir, Resurrection Choir, Catholic Daughters of America and Ageless Wonders. After graduating from Collins High School she worked at and was co-owner of Pemberton Grocery and later Henry’s Drive-In Restaurant. But first and foremost she was a caring mother and housewife and occasional Girl Scout Leader.

A funeral liturgy will be held at 11:00 a.m. on Thursday, January 5, 2017 at the St. Francis deSales Catholic Church with Father Paul Wharton officiating. Burial will follow in Sunset Memorial Park. Friends may visit with the family from 6:00 p.m. to 8:00 p.m. on Wednesday, January 4, 2017 at Calfee Funeral Home with a prayer service starting at 7:30 p.m.
Pallbearers will be Mark Misco, Chris and John Dellamea and Andrew, Matthew and Simeon Gilson.