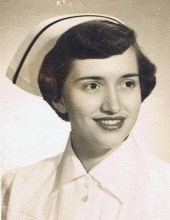 Theresa Marie Laux Rahall, age 82, of Beckley, WV, passed away peacefully at her home on December 23, 2020, surrounded by her family.
Born on March 31, 1938, in Toledo, Ohio, she was the daughter of the late Sylvester and H. Irene Laux.
Theresa graduated from Burnham High School in Sylvania, Ohio, in 1955. She then attended St. Vincent’s School of Nursing, graduating in 1958 as a registered nurse. Theresa worked in many facets of nursing: Med-Surg, OR, Labor/Delivery, and Public Health. She retired as an RN from the Veteran’s Hospital in Beckley after caring for residents in the nursing home division for over 15 years. Theresa was outstanding in her profession, receiving the Award of Excellence from the Veteran’s Administration. Theresa was truly an advocate for her patients and touched many lives during her career. In her spare-time she enjoyed cross-stitch, quilting, crocheting, and working crossword puzzles. Theresa loved to travel and was an avid reader.
In 1959, Theresa married James Rahall. Together they owned and operated the “Slack Rack”, a men’s clothing store in downtown Beckley and the Crossroads Mall. They were married for over 50 years and raised three children: Tim, Ann, Karan. Theresa was a very attentive and loving wife and mother.
In addition to her parents, Theresa was preceded in death by her husband, James; her son, Tim; brother Alan Laux; father and mother-in-law Abraham and Farida Rahall; brother-in-law, Sandy Cormack; and her little Yorkshire Terrier, “Poo-Chi”, who Theresa loved and adored.
Those left to cherish wonderful memories of Theresa include her daughter Ann Rahall, MD, and her two sons Connor McKenney and Michael McKenney of Hawaii; daughter Karan Rahall, with whom she made her home; sister-in-law, Jeanette Cormack of St. Albans, WV; sister-in-law, Gloria Colby and her husband, Jim of Smith Mt. Lake, VA; sister-in-law, Pat Laux, of Huntington, IN; several nieces and nephews; lifelong friend and fellow nurse, Pauline Harrell, of Sylvania, Ohio; caregiver and family member, Cyndi Massie and her husband, Paul, of Beckley. Theresa is also survived by a very close lifelong friend and fellow nurse, Esther Applegate and her husband, John, of Longmont, CO, who Theresa considered to be her true sister and family member.
Theresa will also be missed by caregivers Dolly, Clara, and Linda. Along with Cyndi, they cared for Theresa with much love. A special, heartfelt thank-you to them for the loyalty and love they showed, caring for Theresa until her departure to Heaven.
A private, Catholic service will be held for Theresa. Burial will follow in the Blue Ridge Memorial Gardens Faith Mausoleum.
Donations of sympathy can be made in memory of Theresa to the Raleigh County Humane Society, or to Hospice of Southern WV.

Arrangements by Calfee Funeral Home.
To order memorial trees or send flowers to the family in memory of Theresa Marie Rahall, please visit our flower store.