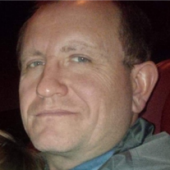 Steven Wayne Green, 49, of Crab Orchard, went to join his Heavenly Father after a valiant battle against cancer and sarcoidosis with his wife by his side on Saturday, June 22, 2019 at Bowers Hospice House. Born June 12, 1970 in Beckley, he was the son of the late Janet Sue Wall Green.
Steve was a retired veteran serving in two foreign wars and served his country for 22 years. He enjoyed fishing, hunting, riding 4-wheelers but cherished most of all the time spent playing Minecraft with his daughter Raina.

Besides his mother Steve was preceded in death by grandparents, Edna and Elbert Wall; mother-in-law, Norma Jean Walthew and several aunts and uncles.

Services will be 1:00 p.m. Wednesday, June 26, 2019 at Calfee Funeral Home with Rev. Reed Green, Jr. and Pastor Leonard Sizemore. Burial will follow in Sunset Memorial Park. Friends may call on the family 2 hours prior to the service.

Pallbearers will be his nephews David, Brandon, Jacob, Michael and Tyler Green as well as a good friend Mike Greer.