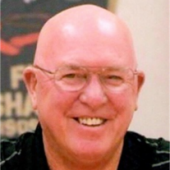 Sterling T. Lewis, Jr., 65 of Hurricane, WV, left this earth peacefully surrounded by his family following a short but hard fought battle with cancer. Born January 19, 1951, he was the only child of the late Sterling T. Lewis, Sr. and Helen Walker Lewis of Shady Spring.

After graduating from Shady Spring High School in 1968 he went on to receive his Bachelor of Education degree from West Virginia Tech in 1972. For the next 26 years Lewis was the Drivers Education teacher at Shady Spring high School, for 12 of those years he coached football, wrestling and track. Sterling served his community as the Fire Chief of the Beaver Volunteer Fire Department for 20 years. Sterling Jr. followed in his father’s footsteps and served two terms as a state legislator in the House of Delegates in 1982 and again in 1986. In 1998, House of delegates Speaker Bob Kiss appointed him to his team to assist in monitoring the legislative sessions, which he did until 2000. Shortly after the conclusion of the 2000 legislative session he was hired as the WV State Fire Marshall where he served honorably and continually until he retired from his post on April 30, 2013. After retiring he was able to renew his love for riding his Harley and his passion for being on the water at his houseboat on Lake Cumberland where his guitar was never far from his hands.

Sterling is survived by his son, Sterling “Dusty” Lewis and wife Kimberly B. Lewis and their children, Sterling “Cade” Lewis and Alivia D. Hatfield of Shady Spring; daughter, Courtney Lewis-Marshall and her husband Wayne Marshall of Troutman, NC. On July 6, 2013 Lewis married his soul mate, Deborajean Broderick on their houseboat in Kentucky. He is also survived by three stepsons and their families; Chad Fallecker and his wife Melissa along with their children, Christian, Kaylee, Mallory and Lilly, Brad Fallecker and his daughter Allison and the youngest, John Fallecker and his two sons, Brody and Blake.

A visitation will be held on Sunday, December 18, 2016 from 10:00 a.m. to 2:00 p.m. at the Beckley-Raleigh County Convention Center. A celebration of life will start at 2:00 p.m. with Fire Chaplain and friend of Sterling, Allan Costo officiating. Burial will follow in Blue Ridge Memorial Gardens where Lewis will be laid to rest with full firefighter honors.

In lieu of flowers the family is asking donations be made to the Sterling T. Lewis Memorial Scholarship Fund which will be awarded to a student who is pursuing a career in public safety. Donations can be sent to Sterling Lewis Scholarship, C/O First Community Bank, Attn. Hazel Burroughs, 1220 Ritter Dr., Daniels, WV 25832.