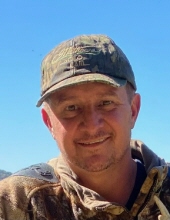 Ryan Glenn Haga, 44, of Soak Creek, West Virginia, passed away on October 20, 2021. Ryan was a loving and devoted family man and a devoted follower of Jesus Christ.

Ryan was born on January 21, 1977, in Beckley. Ryan was an avid golfer. He also loved hunting and being outdoors. Ryan coached Sophia Soak Creek Elementary School basketball for nine years and Independence Middle School for two years. He coached his son Tyler in AAU for many years. He also coached his daughter Courtney in Little League. He was the quintessential parent, always cheering on his kids.

In recent years, on Friday evenings Ryan could be found under the lights of local high schools refereeing football and basketball games. When not on the field, Ryan was in the press box at Independence High School assisting the announcers. Coaches and players across West Virginia admired Ryan. For many years on Thursday evenings, Ryan would play golf with his friends from Cross Point Church.

Ryan began his mining career at 19 years of age. He often shared about the amazing people he has known in the mining industry. He was especially fond of the men he worked with in mine rescue.

Those left to cherish his memory include his loving wife, Tavie. She and Ryan married when they were 18. Their love for each other was evident for everyone to see. One of Ryan and Tavie's favorite times were when they would walk on the beach. Ryan and Tavie have two exceptional children. Courtney (Michael Moore “Big Mike”) and Tyler (Chandler McCormack “Chan Chan”) of Soak Creek. The apple of Ryan's eye was his beautiful granddaughter Oaklea. She was Poppy's girl.

Ryan is also survived by his parents Glenn and Mitzi Haga of Soak Creek, WV; His grandmother Myrtle Basham of Sophia, WV; His in-laws Sherri (“Granno”)and Roy Meadows (“Duh”) of Sophia; and his brother Brent Haga of Soak Creek. In addition, Ryan's best friend since childhood, Steve Pierce, survives him. Greg Fernett and Lincoln Birchfield were very special to Ryan as well. Ryan was preceded in death by his grandparents, J.D. and Nancy Delp.

The family would like to thank all of those who have called, visited, brought in food, and most importantly, prayed for them during this time. Also, the family wants to thank Greenbrier Medical Center for their hard work and kindness. Finally, a special thank you to Mark Huffman and Jim Bailey, who were with Ryan when he went to be with the Lord.

On Thursday, October 28, 2021, Ryan's life will be celebrated at Cross Point Church 110 Crescent Road in Beckley. Visitation will begin at noon, and the service will start at 2 PM. Interment will take place at Sunset Cemetery in Beckley. Pastor Vondie L. Cook, II, and Pastor Dale Birchfield will be officiating.
To order memorial trees or send flowers to the family in memory of Ryan Glenn Haga, please visit our flower store.