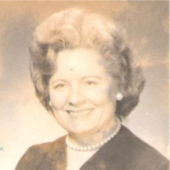 Ruth Mullins, 96, of Beckley, passed away Thursday, October 19, 2017 at Bowers Hospice House. Born January 14, 1921 in Logan County she was the daughter of the late Fredrick and Myrtle Marie Rippeth.

Besides her parents Ruth was preceded in death by husbands, Herbert Hensley, Charles Rudy and Oliver Mullins; two sons, Jerry and Gene Hensley; brothers, James and Enoch and a sister, Esther Marcum.

A graveside service will be held at 11:00 a.m. Tuesday, October 24, 2017 at Blue Ridge Memorial Gardens with Pastor Bill Belcher officiating.

Arrangements by Calfee Funeral Home, Beckley.
To order memorial trees or send flowers to the family in memory of Ruth Mullins, please visit our flower store.