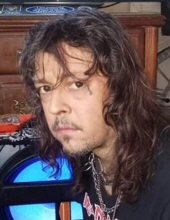 Ronnie Cleveland Fink, II, 41, of Beckley, left this earthly plane on Wednesday,October 27th, 2021 after a
long, hard-fought battle with multiple illnesses. At approximately 6pm on that evening the Holy Spirit
came into his room and gently escorted Ronnie out of that pain ridden body into the Kingdom of
Heaven.
Ronnie was born in Beckley on April 14th
, 1980 to Karen Lynn Underwood and Ronnie C. Fink, I. He grew
up in Beckley, Crab Orchard, and also spent a great deal of time in Shady Spring. He attended Stanford
and Crab Orchard elementary schools and Independence and Park junior high schools. As a child he
could ride or drive nearly anything with wheels. He loved the outdoors, animals, and music… and those
things never changed. Ronnie was such a good artist! His drawings were seen by many of us, but he also
enjoyed clay sculpting, painting, carving, and just creating beautiful and interesting things. There was no
denying that he was an artist at heart….a talented, eccentric, moon-loving,somewhat misunderstood
artist. In recent years Ron had continued his love of all types of music, movies, YouTube, and animals. He
got the biggest kick out of playing a good prank or telling an unexpected joke.He had an infectious laugh
that will always be in the back of our minds when we hear a corny joke, see someone pretend to fall and
be hurt, or watch a funny YouTube video.
Many people only knew all of these things about him, but some of us were privy to the WHOLE Ronnie.
The Ronnie who was not just dark and hurt and who disguised it as humor, but who recognized that
both good and bad exist in us all. He was kind, forgiving, funny, protective,sweet, strong, stubborn,
sharp, silly, and opinionated. Most of all Ronnie loved us all and only wanted the best for everyone in his
life. He had a huge heart and an unwavering faith and belief in God. He was in pain both physically and
emotionally throughout his life, but he believed in the goodness and mercy of God. He had spoken of
this recently and said that he had asked God to make him a Fisher of men. He was. He could give advice,
guidance, and perspective that would sometimes leave you speechless. For all of these things and so
many,many more, he will be remembered and cherished until we meet him again, as he would
say….Later♡
Ronnie was preceded in death by his paternal grandmother Mae Fitzpatrick, paternal great grandmother
Edith Lester, his maternal grandmother Ella Mae “Nana" Underwood, maternal great grandmother Clara
Harrah, his father Ronnie Cleveland Fink, I, his very special cousin Michael Janey, paternal uncles Mickey,
Ricky, and David Fink, paternal aunt Pam Janey, step grandfather Gene Fitzpatrick, very dear friends
Stuart Jones, Stephen Morton, and Anthony “Jud”Radford as well as several other close friends.
• Loved ones who will cherish his memory include his mother Karen Lynn Underwood Fink and
her husband Michael, brother Randy Gene Fink,stepsister Michele Jean Fink, sister-in-law
Ashley Hardin Fink,maternal aunt Linda Bloomfield, maternal uncle Joseph Underwood, nieces
and nephews Elma Lee “Elmie" Burgess, Ella Mae Fink, Eli Blue Fink, Lindsey Morgan Castle,
Pamela Mackenzie Janey Britt and her husband Matthew Britt, cousins Joseph “Little Joe"
Mullins, Katie Underwood Ferrell, Matthew Underwood, Jamie Delph,Jeffrey Fink, Christopher
Toney, Brandon Toney, Christopher Lively, and Brittany Lively. Dear friends were like family to
Ronnie. He will be loved and missed by “brothers” Johnie “Cheerio" Redden, Todd Bigelow,
Timmy Lawson, Stephen Fitzwater, Randy Moore, Chris Bartoli, and Ricky Dawson, “sisters”
Jacque Shivley, Andrea Moore, Phyllis Morris, Stephanie Godbey, Jamie Middlebrook, Destinty
Bickford, and Kiki Fitzgerald, those who he lovingly called “mom” and “dad" Wilma Shivley, Mary
Dowdy, Retha Heath, Patricia Dawson, and “Big Tim" Asbury, and his “littles" Kayla and “Little
Timmy” Lawson, D.J. Adkins, Jonathan Slone, Addyson, Jack, and Caleb Blevins, Tyler and Drew
Williams, Carly Humphrey, and Galbriel Bickford. Of course he will be loved, remembered, and
missed immeasurably by his partner of 23 years Becky, Rebecca Louise Shivley, and their baby
and Ronnie’s trusted companion of over 10 years, Angus.
To order memorial trees or send flowers to the family in memory of Ronnie Cleveland Fink, II, please visit our flower store.