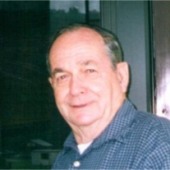 Robert “Cobby” Richie Hope Jr. of Fireco Went home to be with Jesus on April 9, 2017.
Born February 4, 1930, Cobby lived his entire life in Fireco, initially, with his first wife, Charlotte Roark, where they raised their three daughters Debra, Bonnie and Carrie. Cobby graduated Stoco High School in Lego, WV. After high school, he served in the US Air Force in Korea. At the end of the Korean war and at the end of his enlistment, his superiors encouraged him to remain in the Air Force, enter Officer Candidate School, and become a commissioned officer and fighter pilot.
He declined, saying he had a more important future in mind. That was to return home and marry the love of his life, Charlotte Roark. They were married in Beckley, WV on April 19, 1952 and remained together until Charlotte’s death on November 5, 2001.
Cobby happily worked as a coal miner for the next thirty-seven years, until retirement. He later married Marie Watson who lovingly and faithfully cared for Cobby, remaining by his side the remainder of his life, while living in Fireco. They were both long-time members of the Teal Apostolic church. He loved gardening, cooking and gathering berries and his favored mushrooms. Most of all he dedicated his life to his religious beliefs and providing for his family. He also loved driving those winding roads on his daily trips to the post office in Coal City, WV as well as to Beckley when necessary.
Cobby was preceded in death by his first wife, Charlotte; his parents Robert R., Sr. and Agnes Irene Hope, of Fireco; and by his “best friend”: his Mother-in Law, Bertie Roark .
He is survived by his devoted wife of thirteen years, Marie; daughter Debra (Joe) Lively of Albemarle, NC; daughter, Bonnie (Fred) Hall of Crab Orchard, WV, and daughter, Carrie Workman of Beckley, WV; Sisters Sallie, Esther and Margaret; brothers Vincent (Pat) , Bill (Janie) and Johnny (Brenda); grandchildren Terry Martin, Thresa Dunfee and Robert Hall; three great grandchildren; and one great great grandchild, Alexis Belcher; two step sons: Gary (Ruth) Watson and Joe Watson. Cobby also leaves many friends who will miss him dearly, as will all who knew him.
Funeral services will be held at Calfee Funeral home in Beckley at 12:30 p.m. Friday, April 14, 2017 with pastor Gary Blankenship officiating. Burial will follow in Blue Ridge Memorial Gardens Friends may visit with the family from 10:30 a.m. until service time on Friday.
The family suggests memorial contributions be made to Hospice of Southern WV, P.O. Box 1472, Beckley, WV 25802.