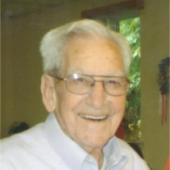 Robert Rice Thacker, 93, of Beckley passed away Tuesday, January 30, 2018. Born December 15, 1924 in Norton, WV he was the son of the late William Rice and Belva Capalinger Thacker.
Robert was a retired miner for Eastern Coal. He was a member of North Beckley Church of Christ and the UMWA.
In addition to his parents he was preceded in death by his wife, Lucille Evelyn Thacker.
Robert is survived by sons, Robert (Michael) Thacker and wife Diane of Shady Spring, David Thacker and wife Pamela of Lynchburg, VA; daughter, Sandra Parker of Indianapolis, IN; grandchildren, Greg Pastor, Kimberly (Scott) Gilliam, James M. and Michael S. Thacker; great-grandson, Christopher Pastor; step grandchildren, Todd and Tim Lilly; step great-grandchildren, Brittany, Amber, Alyssa Lilly; sister, Glenoka Givens of Baltimore, MD; niece, Shirley Sturm as well as other family members.
Funeral service will be 1:00 p.m. Saturday, February 3, 2018 in the Calfee Funeral Home Chapel with Pastor Charlie McKinney officiating. Burial will follow in Blue Ridge Memorial Gardens. Friends may visit with the family from 11 am until service time on Saturday.
In lieu of flowers the family suggests that memorial contributions be made to North Beckley Church of Christ.