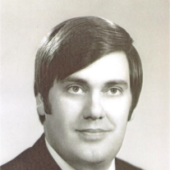 Robert David Wilkes, age 70, passed away at his home in Jacksonville, Florida on January 27, 2016. He was the most kind, loving and devoted husband, son, brother, nephew, uncle and friend. A descendant of pioneer Raleigh and Mercer county families, Robert was born in Beckley, WV in 1945. He spent his childhood and early teen years in Beckley before his family moved to Knoxville, TN. He was a graduate of Knoxville West High School and the University of Tennessee. Robert held a B.S. and M.S. in Earth Sciences.
Robert was preceded in death by his grandparents, William Wesley and Grace Lilly Wilkes and Wade and Lena Spangler Sisson; parents, William Wesley Wilkes, Jr. and Helen Sisson Wilkes; brother, William Wesley Wilkes, III; sister, Nancy Grace Wilkes Powell; nephew, William Wesley Wilkes, IV; father and mother-in-law, Richard and Elsie Kinkeade, and uncles and aunts, Philip, Lewyn, James, Grace and Joan Wilkes, and Blaine, Gray and Glen Sisson.
Robert began his career in the petroleum industry in Tulsa, Oklahoma where he met and married his wife Deborah. Throughout their lifetime together, Robert both worked for and provided professional consulting services to many Global 500 Corporations in the petroleum, chemical, and pharmaceutical industries in countries around the world and eventually, the two formed their own specialty consulting services company. Robert never hesitated to accept challenging projects in various highly dangerous locations throughout the Middle East, especially when the best interests of the United States were involved. He may have left West Virginia, but the character and integrity lessons he learned there remained with him throughout his lifetime.
Robert was a devout Christian who loved the Lord and placed his relationship with God above all others. He was baptized at First Baptist Church on Neville Street. While the couple lived in many cities during their lifetime, Robert always made time to devote to the needs of others. While living in the greater Memphis area, he and his wife volunteered many hours as “readers’ to children receiving treatment at St. Jude’s Children’s Hospital. The bravery and maturity of such critical ill young children was such a blessing to Robert that his family is requesting that contributions be made to St. Jude’s Children’s Hospital I his name, in lieu of flowers.
Robert is survived by his beloved wife of over 43 years, Deborah Kinkeade Wilkes; sister Connie Wilkes; sister and brother-in-law, Jane and Edward Rymer of Knoxville, TN; sister-in-law, Jean Wilkes of Houston, TX; aunts Betty Wilkes of Beckley, WV and Ernestine Pushkar of Melcroft, PA; cousins John and Rosemary Wilkes and Jennie Breeden; nieces and nephews, Frederick Powell of Knoxville, TN, Dr. Jennifer Rymer (Daniel Shumate) of Durham, NC, James (Tonya) Powell of Fredericksburg, VA, Kristin (Gary) Loveday of Sevierville, TN, Courtney (Todd) Cluxton of Houston, TX and nine great-nieces and nephews.
A memorial service will be 2:00 p.m. Saturday, April 23, 2016 at First Baptist Church, 422 Neville St. with Rev. Doc Adkins officiating. Friends may visit with the family from 1:00 p.m. until service time. Burial will be in Sunset Memorial Park at the Wilkes Family Triangle.
Contributions to St. Jude’s Children’s Research Hospital may be made via www.st,jude.org “dedicate my donation” program, which will send a special notification card electronically to the Wilkes family, or send notification by mail via a form on the donation site page.
On line condolences may be left at www.calfeefh.com.
Arrangements by Calfee Funeral Home, Beckley.
To order memorial trees or send flowers to the family in memory of Robert David Wilkes, please visit our flower store.