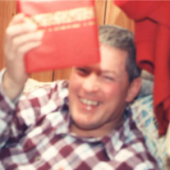 Richard “Rick” Venable, 70, of Coal City went to be with his Lord and Savior Jesus Christ on January 4, 2019 at Bowers Hospice House.
Born June 15, 1948 to the late Raymond and Mary Thompson Venable.
Rick attended the Sunset Missionary Baptist Church in Coal City where he had many friends. He also attended Mabscott Christian Baptist Church. Always kind and polite, he had many friends. He was a WVU Mountaineer fan and never missed the Tony Caridi radio show.
A lifetime resident of Coal City, he resided with his brother, randy and sister-in-law Donna, the last 1o years.
In addition to his parents he was preceded in death by his aunt, Geneva Cadle; uncles, Arbey and John Thompson and cousin, David Thompson.
Survivors include his brother, Randy and wife Donna of Coal City; special nephew, Randall and wife Ali and grand-nephews, Myles and Ethan Venable of Beckley; special niece, Angela and husband Frank and grand-nephew, Zach and grand-nieces, Lexi, Karly and Layla Priddy.
Services will be 1 PM Monday, January 7, 2019 in the Calfee Funeral Home Chapel with Pastor Mike Rose and Pastor Mike Davis officiating. Burial will follow in Sunset Memorial Park. Friends may visit with the family one hour prior to service on Monday.
The family suggests memorial contributions be made to Sunset Missionary Baptist Church, P.O. Box 1177, Coal City, WV 25823.

Arrangements by Calfee Funeral Home.
To order memorial trees or send flowers to the family in memory of Richard Rick Venable, please visit our flower store.