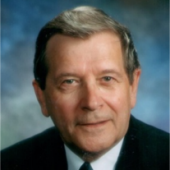 From meager beginnings of a coal camp life, where his father, grandfather and uncles all were miners, his life revolved around Killarney Elementary, a small seven room school, grades 1-8. Chores of the garden, cows, chickens and pigs, as well as friends to play with made for a memorable childhood.

The move to Crab Orchard, WV would lead him to his years at WWHS, where he excelled academically and in sports, as well as being president of his class all three years. Those classmates have remained important to him all his life, as plans for their 66th reunion are in place for this summer. He talked of those who shepherded his life in those years: Reverend Shirley Donnelly, who preached stay away from the three 'D's, dirt, debt and the devil!' Robert C. Byrd and Clyde Fitzpatrick taught adult and youth classes; Principal Peregory, Coach Jerome Van Meter and Glenn Sallack, music teacher. He was so grateful for their influence and guidance.

Ralph was a Duke University civil engineer, made possible by academic scholarships and a work/study program. He was an Army veteran with service in Chicago and New Mexico working on Nike missiles.

He met Joan Maples in high school and they married in 1953. They had two children, Rebecca and Ralph.

His military experience led to employment in the aerospace industry in Phoenix, AZ and Southern California where he worked on Atlas missiles and the Apollo Project, involving the environmental control systems.

The family returned to Beckley in 1965, with work at Beckley Manufacturing and his 36 year career in road construction with Vecellio and Grogan. The seventies and eighties were times of great construction of the interstate roads in our state, as well as the eastern US. In the 14 years he was away from Beckley, he had prepared for a career, married, served in the military, and worked in the aerospace industry, helping put a man on the moon. He had an exciting and unusual career and life came full circle coming back to WV where the excitement continued in road design and as he would say, 'digging dirt' till his retirement in 2003.

Left to cherish the memories and his legacy of wisdom, generosity and provider to his family and friends are his daughter Rebecca Beckett, his grandchildren, Sydney Emana and husband, Anthony, Tyler Clay, great grand children, Hunter and Kori Emana. He also leaves his cousin Linda Klopp, who was really his little sister, and a host of cousins and friends.

Please join us in a Memorial Gathering celebrating Ralph's life on Friday, April 14 at 5 pm at the Commission on Aging at 1614 South Kanawha. Bring your stories and your pictures as we remember and celebrate a life well lived. As Ralph always said, 'I've had a really good ride in this life.'