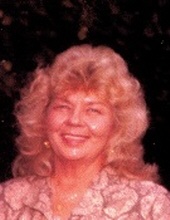 Patricia Sue Pack, 69 of Coal City passed away Thursday, December 26, 2019.
Born August 19, 1950 in Raleigh County, she was the daughter of the late Bill and Nora Smith Cadle.
Patricia was a former switchboard operator for Pinecrest Hospital. She is survived by a daughter, Tammy Coalson of Princewick, WV; son, Christopher Pack and his wife Erica of Beckley; grandchildren, Patrick and Jordan Coalson, Levi Pack; brothers, Charles Cadle and his wife Gloria of North Carolina, Gary Cadle and his wife Debbie of Harper Heights and a sister, Hazel Brewer and her husband Richard of Daniels.
A private family service and burial was held for Patricia.
The family would like to thank everyone for all the concern and prayers during this difficult time.
Arrangements by Calfee Funeral Home.
To order memorial trees or send flowers to the family in memory of Patricia Sue Pack, please visit our flower store.