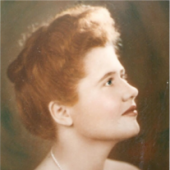 Olivia Jane “Janie” Cooper Bibb, age 98, of Beckley, WV, died on November 11, 2017, peacefully at home surrounded by her loving family. She was born in Earle, Arkansas to the late Claude Alfred and Araminta Machen Cooper. She attended Sullins College, graduated from the University of Arkansas, and Tulane University with a Masters degree in Social Work. During WWII while in New Orleans, she began her career at the American Red Cross attending wounded soldiers at Charity Hospital, and later at Kennedy General Hospital in Memphis, TN. During this time she met her late husband, Captain Edgar Earle Bibb, Jr, and they married in Marion, AR in 1944. At war's end, they returned to West Virginia.

Janie and Earle shared Gundagai Farm at White Oak, hosting the Rotary Club’s annual Disabled Children’s picnic, camping for the Boy and Girl Scouts, and annual school picnics. In the 1960’s, she resumed her career with the WV Dept. of Welfare. She was a member of the DAR, the Colonial Dames, the Beckley Woman’s Club and the Azalea Garden Club. She especially enjoyed her book club and always remembered the veterans at the VA Hospital. Janie was a “blithe spirit”, known for her southern charm and hospitality, generosity, energy and intellect.

Following Janie’s wishes she was cremated with a memorial service to be held at a later date.

Her family would like to express its appreciation for the dedicated and caring staff at Hospice of Southern West Virginia and especially the home health nurses.

Arrangements by Calfee Funeral Home, Beckley.
To order memorial trees or send flowers to the family in memory of Olivia Bibb, please visit our flower store.