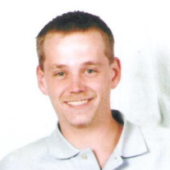 Nicholas Paul Martin left this earth surrounded by family and friends and entered into Heaven on June 18, 2017 where he joined his grandparents who were there to greet him.

Nicholas graduated from Independence High School in 1997. He attended a trade school in Roanoke, VA, Concord College and New River Community College. But he loved hard work so he left college and began working at shipyards in Pittsburgh and Portland, OR. He later moved to Knoxville, TN with his brother and worked in lawn care and at JVC Shopping Channel. He returned home in 2002 and began working at West Virginia Heating and Cooling. He loved his work and was one of the best at his job.

Nicholas accepted the Lord as his savior while in the second grade at Greater Beckley Christian School. He was a great Christian and loved the Lord growing up. Once as an adult he strayed and lost his way. He tried very hard to find his way back and finally began walking with the Lord in May. During his best days or darkest days Nick always loved helping people and giving people whatever he had. He was the guy that wanted to work every day and take care of his daughter, he was the guy that would take his boots off and give them to a homeless man because he has no shoes, he was the guy that would shovel his neighbors driveway or carry in their groceries and walk 2 or 3 miles to clean a sick person’s mess up because they have no one to help them. That’s who Nick was, he had done all of these.

A memorial service will be held at Hollywood Missionary Baptist Church on Luray St. in MacArthur on Saturday, June 24, 2017 at 1pm with Pastor Lyle Zickafoose officiating. Everyone is welcome to attend.