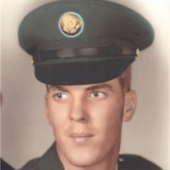 Michael Keith Adkins, 68, of Beckley, passed away Saturday, May 12, 2018.
Born April 24, 1950 in Beckley he was the son of the late Frank Adkins, Jr. and Irene Mann Adkins of Johnson City, TN.
Michael was a retired mine operator for Eastern Associated Coal. He was a disabled veteran serving with the 101st Airborne Division in Vietnam.
In addition to his mother he is survived by his sons, Joshua David Adkins and family of Beckley, Michael Brandon Adkins and family of Glen White; sister, Susan Hicks of Johnson City, TN.
A private committal service will be held at a later date.
Online condolences may be left at www.calfeefh.com.
Arrangements by Calfee Funeral Home, Beckley.
To order memorial trees or send flowers to the family in memory of Michael Keith Adkins, please visit our flower store.