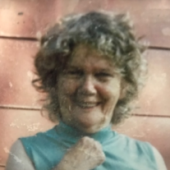 Loving wife, mother, grandmother, and great grandmother, Maycel Junia Foster Williams, age 96, of Calloway Heights, Beckley, WV, gently passed away at Raleigh General Hospital surrounded by her children on January 15, 2019 and was welcomed into heaven by her Lord Jesus Christ.
She was lovingly cared for by her sons, Daniel and Jeffrey Williams for many years. In the last two years, daughter Susan Grippo and other family members helped with care. Born August 3, 1922, in Wyndal, WV, Maycel was the daughter of the late Estella (Sanders) and Johnson Foster. In addition to her parents, she was preceded in death in 1984 by her precious husband, Robert Nagle Williams.
The last of her generation, she was preceded in death by brothers, Dennis and Naymon Foster and sisters, Rosa Jane Foster, Bertha Brown, Myrtle O’Dell and Bettie Ella Parr. After Maycel lost her mother at age 4, she was raised by her sister, Bettie Ella.

Maycel attended the Assembly of God church for many years and was Pentecostal by faith. Maycel worked in the World War II effort making munitions in Brockton, Massachusetts, then worked for the Department of Agriculture in the state of New York. She spent several years working in Louisiana before returning to Beckley, WV, where she earned an LPN degree in nursing and worked at Pinecrest Sanitarium and met her husband, Robert, whom she married in November 1948.
Life as a homemaker followed as she raised five children, who are left to cherish her memory: Susan Bell Grippo, Nashville, TN; Janet Lee Smith, Crab Orchard, WV; Daniel Edward Williams, Jeffrey Kim Williams, John Dennis Williams, all of Beckley, WV; and also one special nephew Billy Carter, Shady Springs, WV, as well as many other nieces and nephews.

A service celebrating her life will be held on Saturday, January 19, 2019 with visitation beginning at 11 am, followed by the service at 1 pm at Old Grove Chapel, 370 Old Grove Road, Crab Orchard, WV, with Rev. Ronald Miller officiating. Burial and graveside service will follow at the Prosperity (Williams, Wright and Kidd) Cemetery, Prosperity, WV. A dinner will then be served at the church.
Maycel was a kind, gentle spirit who blessed everyone who knew her. She completely trusted the Lord Jesus to care for her and her family and was assured of heaven’s reward.

Arrangements by Calfee Funeral Home.
To order memorial trees or send flowers to the family in memory of Maycel Junia Williams, please visit our flower store.