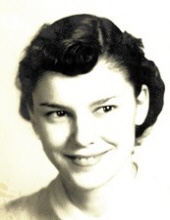 Mary Sue (Burklin) Hesselberg January 25,1935 - June 18, 2021
North to Alaska travels were not a girlhood dream for Mary Sue (Burklin) Hesselberg. She was a southern gal ya’ll and loved her sweet ice tea. Born January 25, 1935 in Nashville TN the one and only child born to loving parents James R. Burklin and Emma L.(Brewer) Burklin. Mary Sue, who preferred to be called Sue, was raised in the traditions of the God-loving south; church, good music, cornbread, buttermilk, plums, tomatoes, southern fried chicken and coconut cake, Mary Sue’s favorite cake.
When Sue was fourteen years old her mother Emma passed away. Her father James remarried and his new wife Gladys (Scarborough) Burklin stepped into Sue’s life and raised her as her own. Sue graduated from Issac Litton High School in 1953.
When Sue neared dating age her father warned her to stay away from those wild military fellas. Nashville was home to Ladd Air Force base and it wasn’t long before Sue’s girlfriend arranged a blind date for her with a young Air Force fella named Dean Hesselberg. After a few secretive dates Sue arranged for the much dreaded introduction of Dean to her father. The first meeting went well. Sue’s father told her if she wanted to keep this fella she should make him some of her fried chicken and take him on a picnic. It worked. A few months later, on June 12, 1953, Sue and Dean were married.
Dean was deployed to Fairbanks Alaska and the adventures began for Sue. The southern gal had never been out of Tennessee and was now going to fly to Fairbanks and join her new husband. That was the beginning of a life that would bring the couple back to Alaska several times throughout their lives.
After Dean was discharged the young couple headed to Dean’s home state of Wisconsin with daughter Karen in tow. Sue not wanting to have an only child, as she always wished for a brother or sister, gave birth to two more daughters Shirleen and Dena.
Sue worked at Cuna Insurance and with Dean in the couples own sign business, Creative Outdoor Advertising. Sue retired from Cuna and the couple eventually sold the sign business and moved to their cabin in Ojibwa, Wisconsin.
Not yet ready to fully retire Sue and Dean together with their oldest daughter Karen and husband Charlie (Nielsen) bought the Chippewa River Inn in Ojibwa which they re-furnished and opened as a Bed and Breakfast.
However, Alaska kept calling. Sue and Dean were offered an opportunity to work summer seasons at Bettles Lodge in Bettles and they accepted.
The news of Bettles Lodge needing help came through daughter Shirleen and her husband Curt (Beach) who were and still are living in Alaska.
After a few seasons of traveling back and forth between the two states the Chippewa River Inn was sold and Sue and Dean retired from their positions at Bettles Lodge.
Fully retired and wanting to spend time with Dena, husband Todd (Cushman) and their sons, Sue and Dean moved to Beckley, West Virginia in 2013 where they spent their remaining years.
Mary is survived by daughters, Karen H. Nielsen (Charles) of Balsam lake, WI, Shirleen Beach ( Curt) of Palmer, AK and Dena K. Cushman (Todd) of Beckley, WV; grandchildren; Jason and Cody Beach, Faun and Carson Cushman Burklin, Bryna and Bryce Nielsen; great grandchildren, Devon and Alyssa Beach, Bodie Beach, Oakley Cushman, Jocelyn Chambers.
Services will be 11:00 a.m. Friday, June 25, 2021 in the Calfee Funeral Home Chapel. Friends may visit with the family from 10:00 a.m. until service time. Burial will follow in the Donel C. Kinnard Memorial State Veterans Cemetery in Dunbar, WV.
The service will be live streamed at https://my.gather.app/remember/mary-hesselberg
The family suggests memorial contribution to Bowers Hospice House, 454 Cranberry Dr, Beckley, WV 25801.
To order memorial trees or send flowers to the family in memory of Mary Sue Hesselberg, please visit our flower store.