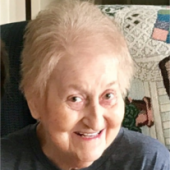 Marguerite D. McMillion Speaks, known better as 'Peggy', passed away at Bowers Hospice House on October 29 after a courageous battle with cancer. Born April 24, 1932, in Herndon, WV, she was the daughter of Lacy and Jessie Duncan McMillion. Peggy grew up in Oceana where she later taught at Berlin McKinney Elementary for many years and was a member of the United Methodist Church. She moved to Beckley in 1977 and taught briefly at Stanaford Elementary.
Besides her loving family, Peggy loved cooking and especially enjoyed preparing meals for family get-togethers.
She was preceded in death by a sister, Geraldine “Gerry” McMillion Conley.
Peggy is survived by her loving husband of 40 years David Speaks of Beckley, niece Deborah (Corey) Gobble of Beckley, nephew Creighton Conley (Jann) of Bristol, TN, great nieces Jessica Palmer of Beckley, Caitlin Reynolds of Johnson City, TN, and Courtney Tucker of Bristol, TN, and a great-great niece Paisley Palmer of Beckley.
The family would like to extend a special thanks to the wonderful nurses and caring staff of Bower's Hospice, and to Delmas Wolfe, hospice chaplain. Honoring Peggy's request, there will be no funeral services.