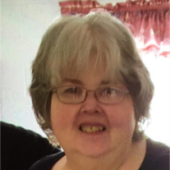 Margaret Sue Cox, 60, of Beckley, passed away Monday, February 22, 2016. Born June 8, 1955 in Beckley, she was the daughter of the late James Arthur and Minnie Lee Skiles Cox.
Margaret was a former department manager for Hills Department Store. She was a member of Faith Community Church and the VFW Ladies Auxiliary. She enjoyed making crafts in her spare time.
In addition to her parents she was preceded in death by a brother, James Arthur Cox, Jr.
Margaret is survived by her sister, Nancy Carol Armstrong of Franklin, IN and nephews, Mark Armstrong and wife Catherine of Franklin, IN, Ronald Armstrong and wife Victoria of Franklin, IN and Greg Armstrong and wife Kelly of Trafalgar, IN; several great nieces and nephews; special friend, Peggy Cantley of Beckley; cousins, Rita Lambert of Johnson City, TN, Roy McVey of Collinsville, VA and Doris McVey of Martinsville, VA
Funeral services will be 12:00 p.m. Thursday, February 25, 2016 in the Calfee Funeral Home Chapel with Pastor Roy McVey officiating. Burial will follow in Sunset Memorial Park. Friends may visit with the family one hour prior to service on Thursday at the funeral home.