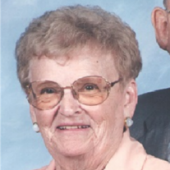 She was born in Lynch, Kentucky on July 4, 1923 to Earl McGrady and Eura Rivers McGrady. They later moved to Beckley,WV where she met her life-long partner and husband, John.

As a young woman she worked at Penny's Department Store doing alterations. She developed her own business making custom draperies and slipcovers while maintaining her home and caring for her family. Her hands were always busy making beautiful things which she sold at Tamarack and Pipestem State Park.

In addition to her parents she was preceded in death by her husband, John Earl Tolbert; her brothers Raymond McGrady, Earl McGrady, Bill McGrady and Tom McGrady, and an older sister, Ruby Edith who died as a baby..

Services will be held Saturday May12, 2018 at Oak Grove Christian Church, Crab Orchard, WV. Friends may call at 2pm, the eulogy will be officiated by William Calhoun at 3pm, followed by burial in the Oak Grove Cemetery.

The family would like to thank the staff of Kanawha Hospice Care, Greenbrier Division for all their work and support during the past few months. They would also like to thank Beth Humphries of Lewisburg whose help as a caregiver was invaluable.

Arrangements by Calfee Funeral Home, Beckley.
To order memorial trees or send flowers to the family in memory of Lorene Tolbert, please visit our flower store.