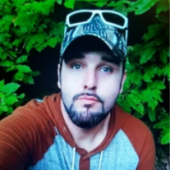 Lance Edward Lucas, 31, of Dameron, WV, earned his angel wings and entered into his Heavenly home on Saturday, November 24, 2018. Born March 17, 1987 in Beckley he was the son of Pamela Sue Lilly and the late Frank Edward Lucas. Besides his father Lance was preceded in death by his grandfathers, Frank Lucas and Burnell Hamrick and uncle, Patrick Hamrick.

Along with his mother Lance is survived by his step-father, Donald Lilly; brothers, Chad Lucas and his wife Cameron of Bolt and Joshua “Cody” Lucas and his girlfriend Bethany of Beckley; step-sisters, Caitlyn Light and her husband Clint of Robson, Monica Claypool and her husband Aaron of Lanark and Erica Lilly and her boyfriend Tyler of Pax; grandmothers, Evelyn Lucas of Dameron and Helen Hamrick of Mt. Lookout; aunts, Sandy, Jeanie, Judy and Kelly; uncles, Bobby, Scott, Danny, Eddie and J.D.; best and loving friend, Regina Ellison; seven nieces and nephews and numerous cousins and other family.

Following his wishes Lance will be cremated with the family having a private service at a later date.