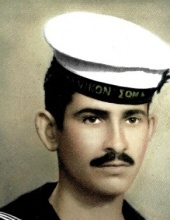 Konstantinos “Gus” Zaferatos, of Beckley West Virginia, passed away on March 4, 2020 at the age of 91. Gus was born in the village of Kaligata in Cephalonia Greece on October 4th, 1928 to Gerasimos and Julia Zaferatos.
He is preceded in death by his parents and 4 brothers and 6 sisters.
Gus was a seamen in the Hellenic (Greek) Navy. He came to America at the age of 25, and married Wilma Jean Buckland (Billie) on September 22, 1953 . He started his career as a dishwasher at the Swan Cafe, he was very proud of his first American paycheck and kept it in his wallet until the day he died. Ten years later, Gus and Billie purchased the Swan Cafe. They operated the cafe up until selling it in 1972. After selling the restaurant he started Zaferatos painting until he retired in 1990. He enjoyed spending time with his grandchildren, gardening, and watching WWE. He will be remembered for his sense of humor, his love for his family, and his kind and gentle nature.
Gus is survived by his beloved wife of 67 years, Billie Zaferatos. His last living brother John Zaferatos, of Greece. His three sons, Jerry and wife Kathy, Dennis and fiancé Misty, and Bill and wife Theresa. His nine grandchildren, Dino and wife Kerri Zaferatos, Kristy Zaferatos, Amy and husband Justin Fairchild, Kalie, Maddy, Connor, Ashlynn, Karigan and Ryan Zaferatos. 5 great grand children, Konstantinos and Thalia Zaferatos and Ella, Jack and Eden Fairchild. His life long family friend George Lowen and many nieces, nephews and friends.
Visitation will begin at 11:00am, followed by funeral services at 12:00pm at St. Nicholas Orthodox Church on Saturday, March 7th, 2020. Officiated by The Very, Reverend Father Samual Haddad. The entombment will follow the funeral service, beginning at 1:00pm at Sunset Memorial Park.
Pallbearers will be his sons Jerry, Dennis and Bill. His grandsons Dino, Connor and Ryan; Justin Fairchild and Tyler Gilger. Honorary pallbearers will be his great grandsons Konstantinos Zaferatos and Jack Fairchild.
The funeral arrangements are being handled by Calfee Funeral Home. In lieu of flowers, the family requests donations be made to St. Nicholas Orthodox Church.
To order memorial trees or send flowers to the family in memory of Konstantinos "Gus" Zaferatos, please visit our flower store.