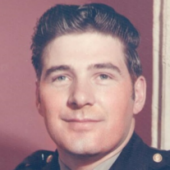 Kenneth Snuffer was born to Dorr and Estell (Blevins) Snuffer on June 13, 1935 in Glen View, WV and later graduated from Woodrow Wilson High School.
Kenneth served in the U.S. Army at Ft. Gordon, GA. After the military he became a police officer and detective in Norfolk, VA. A new handpicked set of officers from across the state were offered a chance to form a new Model Police Department of Nansemond and Suffolk PD where he continued to work for a forty one year career. He had been involved in various high profile cases throughout the country, many that would be detailed in magazines, books and television.
Upon his retirement Kenneth moved back to Glen View and the family farm where he lived. He was known for his love of hunting, fishing and the great outdoors. He raised exceptional gardens and was generous with the harvest which was in keeping with his work ethic and character. Kenneth left to be with the Lord on January 7, 2017 leaving a son, Kenneth Dwayne Snuffer (Doris), grandson Aaron S. Snuffer; daughter Sondra C. Snuffer, granddaughter Summer D. Harris (Israel), great-grandson Ben Harris, daughter Melinda D. Lilly (Henry).
Services will be 1pm Thursday, January 12, 2017 in the Calfee Funeral Home Chapel with Pastors Duane Pease and Kenneth Lilley officiating. Burial will follow in Sunset Memorial Park. Visitation will be one hour prior to the service.
Online condolences may be left at www.calfeefh.com.
Arrangements by Calfee Funeral Home.
To order memorial trees or send flowers to the family in memory of Kenneth Snuffer, please visit our flower store.