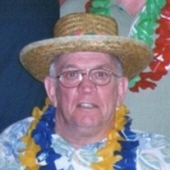 Kenneth Lee Manning, 67, of Sophia, passed away Sunday, September 14, 2014, at Bowers Hospice House. Even though he was paralyzed for eight years, it didn’t slow him down a bit! He was born July 6, 1947 at Ft. Bragg, NC. He was the son of the late Howard Kenneth “Sarge” and Hazel Fink Manning.
Kenny was a retired mine foreman. He was a member of Clifftop Missionary Baptist Church, where his son, Keith, is the pastor. One of his greatest joys was working in the John and Romans Ministry of Bible Baptist Church. When he was not able to go to the mission center, his brother-in-law, Bill Fritz would bring the work to his house.
Kenny never met a stranger. He touched so many lives by his outgoing and rambunctious personality. He loved to joke and tease. He loved all sports. He was an umpire at Babe Ruth field. Watching, cheering and harassing his relatives or friends participating in sports was a delight to Kenny. He loved hunting and fishing, and going to his camp on the river. He wanted everybody to come see him there.
Kenny was enlisted into the Army by a special man; his own father, Sarge Manning. He served in Korea and Germany. While in Germany he served as his dad’s military assisstant. He was in the military for four years.
In addition to his parents he was preceded in death by his wife, Carolyn Hypes Manning.
Kenny is survived by his sons, Keith Manning, wife Renee, of Beckley and Edward Manning and fianc Sabrina of Wagoner, SC. He is survived also by his grandchildren; Jeremy, Nicholas and wife Katelyn, Allen, Craig and wife Vicki; 6 great-grandchildren; brothers, Bill Manning and wife Debby of Fairfield, ME, Dan Manning and wife Jan of Ellicott City, MD; sisters, Sherry Manning Smith of Beckley, Susie Fritz and husband, Bill, of Crab Orchard; numerous aunts, uncles, nieces, nephews and cousins whom he dearly loved; fianc, Trilla Wills of Ghent and Sue Manning, the mother of his sons, of Beckley.

Funeral services will be conducted at 1:00 p.m. Saturday, September 20, 2014 at Bible Baptist Church, 2071 Robert C Byrd Dr., MacArthur, WV with Pastor Vondie Cook officiating. Friends may visit one hour prior to the service. Burial will follow in Blue Ridge Memorial Gardens. Friends may visit with the family from 5-9 p.m. Friday, September 19, 2014, at the church.
Pallbearers will be Nick, Jeremy and Allen Manning, Matthew Smith, Todd and Adam Garlow.
In lieu of flowers the family requests memorial contributions be made to John & Romans Ministry, C/O Bible Baptist Church, P.O. Box 415, MacArthur, WV 25873