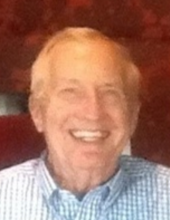 Kenneth Donald Litton of Flat Top Lake, West Virginia passed away on Monday August 26, 2019. Ken was born December 4, 1934 in Glasgow, West Virginia. The son of Virginia N. McQuillen Litton and Orville Donald Litton. Ken was one of 5 children, surviving brothers Charles, Douglas and besides his parents, is preceded in death by siblings Rebecca, David and Keith.

In 1952 Ken enrolled at Marshall College, Huntington, West Virginia and graduating in 1956. While at Marshall he was a member of the Army R.O.T.C., a charter member of the military Scabbard and Blade society, head of student body (Chief Justice), The Robe, honor society and Tau Kappa Epsilon. Upon graduation with an Army 2nd Lt. Commission, December 1956, he was assigned to Fort Benning, Georgia.

He attended The Army Infantry School, Army Parachute School and Army Jumpmaster Parachute School requiring twenty-eight weeks of infantry training. After graduation he was assigned to the 24th Infantry Division, 21st Infantry (Gimlets) Regiment, Korea. During his sixteenth month assignment in Korea he was an infantry platoon leader of units deployed on the thirty-eight parallel Panmunjom areas Korea. In 1959 he was a charter organizing member of the 1st Special Forces, 16th Group, Green Berets, established under the orders of President John F. Kennedy. He attended the Special Warfare School and completed his military career as the rank of Captain.

Upon leaving military service, Ken moved to Louisville where he met the pride of his life and loving wife of nearly 55 years, Peggy Francis Gaddie. They were married on 19 September 1964. Together, they had one son, Kenneth Donald Litton, Jr.

It is also when in Louisville when Ken began his professional career where he worked as a sales engineer for Link Belt Corporation, a mechanical power transmission manufacturer. A born engineer, Ken focused his efforts on the metals and mining industries and spent the bulk of his 50-year career with Reliance Electric / Dodge. There he held a number of engineering, national sales and global marketing roles and played an instrumental role in developing a number of drive systems for conveying and bulk material equipment. Within the industry he was known globally as a trusted innovator and partner developing a number of strategic alliances that ultimately pushed the envelope of production efficiency and helped shape the configuration of material production for the metals and mining industry.

A memorial service will be held at 12pm on Friday August 30th at United Methodist Temple, Beckley WV with Pastor Steve Hamrick officiating. Rite of committal will follow on Saturday at the Gaddie / Litton cemetery in Campbellsville, KY. Friends may visit family 1 hour prior to the service at the Church.

In lieu of flowers, the family asks memorial contributions to be made to United Methodist Temple, 201 Templeview Drive, Beckley WV 25801

Arrangements by Calfee Funeral Home.
To order memorial trees or send flowers to the family in memory of Kenneth Donald Litton, please visit our flower store.