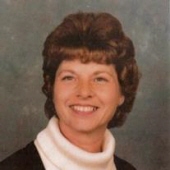 Kathleen Ann Centers, 77, of Coal City passed away Thursday, April 9, 2015 in Hudson, FL. Born December 10, 1937 in Brooklyn, NY, she was the daughter of the late Richard and Ann Enslin Lawlor. Besides her parents she was preceded in death by her brother, Richard Lawlor and nephew, David Lawlor.
Kathleen was a homemaker and enjoyed spending time with family and friends and square dancing with her husband as often as they could.
Survivors include her husband, William Edward Centers; daughters, Sheila Murphy of Grandview and Sharon Piatt of Virginia; son, William Centers, Jr. of Florida; grandchildren, Krystal Centers, Meghan Nicholson, John Murphy and Emily Murphy; brother, Ronald Lawlor; sister, Irene Peters; nieces, Cheri Sizemore, Susan Lawlor and Theresa Lawlor; nephews, Danny and Jimmy Lawlor as well as numerous other family.
Funeral services will be 11:00 a.m. Tuesday, April 14, 2015 at the Calfee Funeral Home Chapel. Burial will follow in Farley Hill Cemetery in Coal City. Friends may call on the family from 6-8p.m. on Monday, April 13 at the funeral home.
Friends and family will serve as pallbearers.
Memorial contributions may be sent to a Hospice of your choice.
Online condolences may be left for the family at www.calfeefh.com.
Arrangements by Calfee Funeral Home, Beckley.
To order memorial trees or send flowers to the family in memory of Kathleen Ann Centers, please visit our flower store.