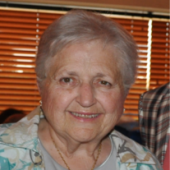 Katherine Kambouris of Beckley, West Virginia, was born on November 22, 1933, to Nicholas and Evangeline Kambouris who both immigrated from Greece. Her parents were devout Christians and members of St. Nicholas Antiochian Orthodox Church in downtown Beckley.
Upon graduation from Woodrow Wilson High School in 1951, Katherine worked in both her parents’ restaurant, Nick’s Diner, on N. Fayette Street, and then later at CIT as a bookkeeper before attending both Concord and Marshall Colleges. After college graduation, she went to work as a medical technologist at Appalachian Regional Hospital in Beckley. During her almost 50 years of service, she advanced her career to the level of Chief Medical Technologist and remained in that position until her retirement in 2003.
Katherine had numerous hobbies and interests but dedicated her life to her beloved St. Nicholas Church where she spent countless hours preparing food and serving the needy. She also loved making baklava at the church to raise money for the many needs of the parish and community. When not working or at the church, she enjoyed bowling and participated in many leagues that won several notable trophies. She was an avid football fan and delighted in cheering on the Mountaineers. However, her greatest love was caring for her family, friends and schnauzers and she always enjoyed entertaining guests at her Flat Top Lake home.
She is preceded in death by her brother, George N. Kambouris and his wife Rose of Bethesda, Maryland, and her sister, Mary Samaras and her husband Chris of Annapolis, Maryland. Her memory will also be cherished by her many nieces and nephews including Stephen Samaras and his wife Challie, Daphne Foreman and her husband Dan, Dr. Nicholas G. Kambouris and his wife Stephanie, Demetrius G. Kambouris and his wife Melissa, and Evangeline Ross and her husband Mike. Katherine had many loving grand nieces and nephews including Marisa Foreman, Christiana Kambouris, Eleni Kambouris, George Kambouris, Katherine Ross and Michael Kambouris. In addition, Katherine is survived by her closest friend of over fifty years, Saundra Barnett, and will be greatly missed by many other close friends including, Dr. Zarina Rasheed, Joanne Kish, Edna and Bob Nasby, Katheryn Wickline, Linda Hickman, Selma Andrews, Joe Ford, Barbra Spencer, Jeff and Jenny Shives, The Rahall family, Lisa and Allen Webb, and of course her beloved dog, Sabrina.
Visitation will be on Wednesday February 13th from 6 to 8 p.m. at St. Nicholas Antiochian Orthodox Church in Beckley. A second visitation will be held on Thursday, February 14th from 9 to 10:45 a.m. The funeral will be presided by the Very Reverend Father Samuel Haddad at 11:00 a.m. followed by interment at Sunset Memorial Cemetery. In lieu of flowers, kindly make donations in Katherine’s memory to St. Nicholas Antiochian Orthodox Church.
To order memorial trees or send flowers to the family in memory of Katherine Kambouris, please visit our flower store.