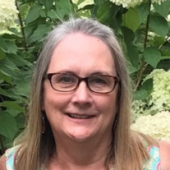 Like the lighthouses she adored, the light within Karen Rose Pyle Borders touched many lives. She stood at the center of her family as a bastion of strength that calmed rough waters. Her light shone brightly, not only for her family fleet but for every passing ship.

She was born March 20, 1954, in Warren, Ohio, to Evelyn and the late Dalton Pyle. She was a loving and dependable daughter, called “Dutch” by her Dad. Although she resided in many different places over the years, she called West Virginia her home for most of her life.

She married the love of her life, Paul Arthur Borders (Art), on Sept. 1, 1979, in St. Albans, W.Va. Their 38 years as husband and wife was more than just a marriage; it was a bond built on friendship, companionship, and a growing love that others felt, admired, and hoped to achieve. They constantly challenged one another in the best possible way, learning from each other while finding the fun in life’s everyday adventures and cherishing the beautiful blessings.

She loved and embraced her role as a mother, which came naturally to her as she selflessly gave all of herself to providing and caring for her three children. She supported each of her children, with their unique personalities and interests, and inspired them to be themselves and to reach their potential. She is survived by her daughter Christine Borders, son Rick (Jessica) Borders, and daughter Sydney (Drew) Scott.

Karen’s two grandchildren became her pride and joy later in life. As Adelyn King and Reid Borders’ “Gigi,” she never ran out of hugs, kisses, and fun.

She always enjoyed spending time with her many in-laws, cousins, and nieces and nephews and making special trips to visit her extended family and forever friends near and far. A second mother to many, Karen was accepting of everyone who came through her door and into her life. Her caring nature also extended into her career as a dental hygienist as she treated countless patients. She earned her degree from West Virginia Institute of Technology.

Family and friends were Karen’s top priority, and she had a gift for bringing people together and staying connected. She lived by the golden rule and believed that actions spoke louder than words.

Those around her were touched by her creativity and wrapped themselves in the warmth of her quilted masterpieces. Her hobbies included hiking and exploring with her husband, traveling, gardening, reading, and taking photographs. She was also a collector of family history, PEZ dispensers, pottery, and other treasures.

While Karen’s light on this earth has been extinguished, her warmth will remain in the hearts of her loved ones forever.

The visitation/viewing will be held Thursday from 1 to 4 p.m. at Calfee Funeral Home, located at 800 South Oakwood Ave. in Beckley. The memorial service will immediately follow at 4 p.m. at the funeral home.

Memorial donations in memory of Karen may be made to the National Park Foundation at nationalparks.org by clicking on “Donate to the Parks.”