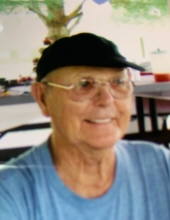 Joseph Leonard Cox, 93, of Coal City, passed away Monday, June 15, 2020. Born May 12, 1927 in Jonben, WV, he was the son of the late Joseph Lonnie and Oceana Farley Cox.
Joseph was a retired electrician for Sterling Smokeless Coal. He enjoyed carpentry and working on cars. He was a veteran of the U.S. Army Air Force.
In addition to his parents he was preceded in death by his wife, Lena Faye Cox.
He is survived by daughters, Linda Forren and her husband Layne of Beckley, Sheryl Thomas and her husband Tommy of Coal City, Debra Mills and her husband Rocky of Coal City; 4 grandchildren and 8 great-grandchildren.
Following his wishes Joseph was cremated. There were no services.
Arrangements by Calfee Funeral Home.
To order memorial trees or send flowers to the family in memory of Joseph Leonard Cox, please visit our flower store.