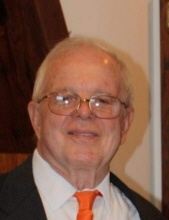 Johnson Wood, Jr., 82, mostly known as “Cotton”, of Beckley passed on to his heavenly home at 8:30 a.m., Saturday, April 4, 2020 with his beloved wife of 13 years, Elaine and sister Rita by his side.
Born August 30, 1937 in Beckley, he was the son of the late Johnson and Melba Catherine Wood.
After graduating high school John “Cotton” Wood joined the Air Force serving his country as an Air Force Police Officer for 10 years before returning to home. He was the owner and operator of Big John’s Packette located on Harper Rd with his wife Gee Gee for 36 years. He was a member of the Cabin Creek Primitive Church in Pierpoint. Cotton loved and believed in his Lord Jesus Christ, had a special love for his sisters and brothers in church and lived a faithful life serving his Lord. He suffered a long battle of lung cancer for 5 years. To know Cotton was to love him. His smile was always there and was an inspiration to his family and friends. His final goal was to go home with his Lord and run through the Green Green Grass of Home with his Savior for eternity.
Besides his parents, Cotton was preceded in death by his first wife, Mary Gertrude “Gee Gee” Harvey Wood of 41 years.
Survivors include his present wife, Elaine Elizabeth Wood of Beckley his loving caretaker during his battle with lung cancer who was always by his side; son, Jonathan “Jay” Wood and his wife Jessica and three grandchildren, Ian Wood currently serving in the Navy, Katherine Wood and John Ross Wood of Clayton, NC; sister, Janice vandal and nieces Cathy and Heather of Arizona; brother, Jimmy Wood of Kansas and his daughter, Kim Hacker; sister, Rita Cox and husband Raymond of MacArthur, WV and their children, Richard Cox and wife Katrina of Prosperity and Jeff Cox and wife Lydia of Prosperity; he was a beloved step-dad to Sandra Presley and husband Tim of Jumping Branch, Herbert and wife Mary Wills of Jumping Branch, Brenda and husband Mark Kesler of Talcott; grandchildren, Amber Cozart, Brooklyn Cozart, Jaxson Mann of Talcott, Shannon Wills, Isaiah Wills and Megan Wills of Jumping Branch, Christopher Kesler of Talcott, Herb Wills and wife Alexa of New Jersey.
He was a loving husband, father, grandfather and brother.
Per his request he will be entombed in Sunset Memorial Park with first wife and beloved mother of jay, Mary Gertrude “Gee Gee Harvey Wood.
In lieu of flowers please make donations to the Shriners Hospitals for Children.
It is appointed unto man once to die. We all have that day when the Lord comes to take us home. April 4th was his day.
2 Corinthians 5:8
“We are confident, I say, and willing rather to be absent from the body, and be present with the Lord”
To order memorial trees or send flowers to the family in memory of Johnson "Cotton" Wood, Jr., please visit our flower store.