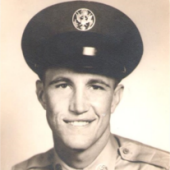 On December 13, 2016, Johnny Valyer Thompson, 84, of Coal City entered into eternal life. Johnny was of the Primitive Baptist faith and died at home as he wished, surrounded by his family. Johnny had battled a very aggressive cancer in the last year of his life.

Johnny graduated from Stoco High School in 1950, served in the US Air Force during the Korean Conflict and graduated from Beckley College in 1958. As a USAF veteran in 1956, he came home to work with his father and later his brother, Lane, as part of the family business, Thompson Transfer. Johnny and Lane later partnered with Clyde and Danny Bell to form Coal City Construction and owned/operated the Coal City Mobile Home Park for many years. Johnny was very involved in several civic organizations, including the Coal City Lion's Club, Coal City Volunteer Fire Department, Stoco Communities Reunion and Raleigh County Veterans Memorial. He was also a board member of the Gulf Area Health Association and Crab Orchard/MacArthur PSD.

Funeral services will be conducted in the Calfee Funeral Home Chapel on Saturday, December 16, 2016 at 12pm with Elder Tom Pack officiating. Burial will follow in Blue Ridge Memorial Gardens. Visitation will be Friday from 6pm to 8pm at the funeral home and one hour prior to the service on Saturday. Friends and family will serve as pallbearers.

The family suggests memorial contributions to be made to Hospice of Southern WV, PO Box 1472, Beckley, WV 25802.