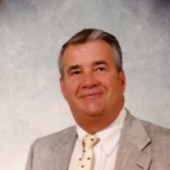 He was preceded in death by both his parents, and aunts and uncles.

John was a prominent member in his community. He devoted his life’s career to maintaining the Wilkes Insurance Agency that his family began and was a former member of the Independent Insurance Agencies of WV. However, John was a man of many talents and passions and lived a full life. After attending Woodrow Wilson High School in Beckley he served his country in the U.S Navy. Once his service to his country was fulfilled he attended Marshall University and Beckley College to continue his education. John also attended First Baptist Church in Beckley.
His passion for life spread through everything that he did. He had many hobbies which most importantly included dirt track racing and classic cars. He was a member of the WV Motorsport Hall of Fame. He cared deeply about the many friendships he had developed throughout his life with fellow members of his industry, community members of Raleigh and Fayette county, and the many friends he had through his racing career.

He enjoyed tinkering with machinery, automobiles, and anything mechanical. His love for mechanics spread even to automobile restoration which is exhibited by his complete restoration of his 1961 Ford Starliner, which he was incredibly proud of.

John was passionate in his love for the small town of Pax which he made his home for almost fifty years. He believed in giving back to his area through community service and volunteerism. Most importantly, John was a man of impeccable values and morals. He dedicated his life to taking care of his family and ensuring they had all their needs met. His tenacity and kind, easy going spirit will be sorely missed by all that knew him.

Service will be 2:00 p.m. Sunday, July 23, 2017 at First Baptist Church Beckley with Pastor Doc Adkins officiating. Friends may visit with the family from 6-9 p.m. Saturday at the church and one hour prior to service on Sunday. Private family interment will be in Sunset Memorial Park.
Memorial contributions may be made to Raleigh County Humane Society, 325 Grey Flats Rd, Beckley, WV 25801 or First Baptist Church, 422 Neville St., Beckley, WV 25801.
Online condolences may be left at www.calfeefh.com
Arrangements by Calfee Funeral Home, Beckley
To order memorial trees or send flowers to the family in memory of John Philip Wilkes, please visit our flower store.