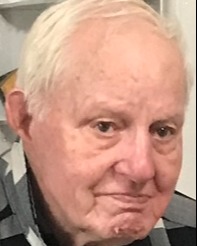 John “Johnny” Edward Covey, 93, of Surveyor, West Virginia passed away on Monday January 23rd, 2023, peacefully at his home.  He was born on February 24th, 1929, to the late William Edward and Nettie Jane Covey. In addition to his parents, he was also preceded in death by his wife of 59 years, Dotsie Ellen Covey, and brother Bryce Benton Covey.

He graduated in 1948 from Trap Hill High School. Following his graduation, he attended Beckley College before being drafted to serve in the United States Army during the Korean Conflict. After serving, he returned to West Virginia where he  worked for Norfolk and Southern Railroad for 43 years in Mullens, West Virginia.

Johnny had a love for the outdoors and enjoyed hunting, fishing, and spending time with his family. He will be greatly missed by those who knew and loved him.e

Services will be held be on Thursday January 26, 2023, at 1pm at Calfee Funeral Home. The family will receive visitors from 12pm to the time of the services. Friends and family will serve as pallbearers.

To order memorial trees or send flowers to the family in memory of John Edward Covey, please visit our flower store.