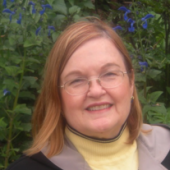 Jerry Louise (O'Leary) Shriver , 69, of Beckley, WV died Wednesday, January 4, 2017. She was born February 5, 1947 in Muskogee, OK to Col. Robert Jeremiah and Lois Anne (Brandt) O'Leary of Las Cruces, NM. She was raised in an Army household living in many parts of the world including Japan, Germany and Turkey. She graduated from Radford College in Radford, VA with a bachelors degree in home economics. Jerry loved flowers and was an active member in the garden club. She served as West Virginia State president for three years. She also enjoyed reading, cooking, traveling. and visiting her children and grandchildren.
Jerry is survived by her husband George E. Shriver, who were married in New Mexico on August 16, 1969; her two daughters , Allison Shriver, of Beckley, Megan Taylor and her husband Matt of Morgantown WV, and son Evan Shriver and his wife Heather of Richmond, VA. Also surviving her are eight grandchildren Mason, Parker, Tanner, Benjamin, Libby, Carson, Levi and Clayton. She was preceded in death by her parents and grandson Ira Sands. In addition she is survived by three brothers, Patrick Jeremiah, Robert Charles and Dennis and sister, Kelly. She also was preceded by her brother Michael and sister Peggy Jo.
Visitation will be held at Calfee Funeral Home,800 S. S. Oakwood Ave. Beckley from 6:00 to 8:00 PM Friday January 6 and funeral service at Sunset Memorial Park, Harper Rd Beckley at 11:00 AM Saturday, January 7, 2017
On line condolences may be left at www.calfeefh.com.
In lieu of flowers the family request donations to March of Dimes March for Babies, 300 Cedar Ridge Dr., Suite 311/313, Pittsburgh, PA 15205
Arrangements by Calfee Funeral Home, Beckley
To order memorial trees or send flowers to the family in memory of Jerry Louise Shriver, please visit our flower store.