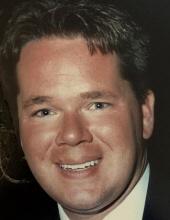 James Preston McMillion passed away suddenly Sunday, February 23rd, at the age of 46. He was preceded in death by a beloved aunt, Phyllis Walker. He is survived by his dedicated parents, William and Mary Loretta McMillion, his supportive aunt and uncle Rebecca and Russell Cook, and his two beautiful daughters, Madison Grace and Jaimee Elyse. He also leaves behind many close friends.
Born in Beckley and raised in Crab Orchard, James, also known as “Jamie”, was a 1991 graduate of Woodrow Wilson High School. He obtained both his Bachelors and Masters degrees at Mountain State University, after which he practiced as a Physician Assistant. Dedicated to his profession, James also assisted in the accreditation and leadership of Physician Assistant programs at the university level.
James was a lifelong member of the Church of God. An accomplished pianist, he was a former “Teen Talent” winner, and held several praise and worship leadership positions in southern West Virginia.
James will be greatly missed and fondly remembered by his family as someone who was always willing to help when he could and who considered his children to be his proudest accomplishments. He defied those who preached anything less than Christ’s perfect grace and he never claimed to be perfect, himself. Friends will remember him as a fan of The Cure and as a constant defender of the underdog, of the oppressed, and of those whom society rejected.
Funeral services are at Calfee Funeral Home, 800 South Oakwood Ave., Beckley, W.Va., Friday, February 28th, at 1p.m. Visitation/viewing is open between 12 p.m. and 1 p.m.
In lieu of flowers, his family requests donations in his memory to be sent to: Beckley Dream Center, 224 Pinewood Dr., Beckley, WV 25801 .

Arrangements by Calfee Funeral Home.
To order memorial trees or send flowers to the family in memory of James Preston McMillion, please visit our flower store.