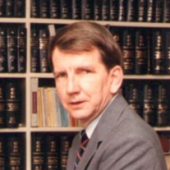 James 'Jim' Vaughan, Jr., 84, of Beckley, W..V. passed away on Thursday, April 28, 2016. He was the son of the late James F. Vaughan and Clementine 'Clemmie' Vaughan. He attended local schools, graduated from Woodrow Wilson High School in 1949. A graduate of Marshall University, he worked as a cost accountant, and was drafted into the U.S. Army. After leaving the Army he enrolled in law school at the University of Tennessee. Due to the unexpected death of his father, he returned to Beckley to work as C.P.A. Jim completed his law studies at the West Virginia University College of Law, returning to Beckley to practice law with Thornhill, Kennedy and Vaughan Law Offices, and later Vaughan and Patterson Law Office.

Jim was an active community member in Beckley for many years. He served as
President of the Raleigh County Bar Association, President of the Beckley Little League, Board Member of United Way, member of the Beckley Rotary Club since the late 1950's and honored with the Paul Harris Fellow Award. In recognition of his services to the Walker Foundation, the Beckley Area Foundation established the James F. 'Jim'
Vaughan, Jr. Fund.

A Celebration of Life will be12:00 p.m. Monday, May 2, 2016, at Calfee Funeral Home, Beckley, with Rev. Randy Adkins officiating. The family will receive friends from 11:00 until service time on Monday.
In lieu of flowers, memorial contributions may be made in his name to Beckley Area Foundation
(James F. Vaughan, Jr., Fund), Beckley Little League, Rotary International, the
Marshall University General Scholarship Fund, or the West Virginia University College of Law Student Scholarship Fund.
On line condolences may be left at www.calfeefh.com.
Arrangements by Calfee Funeral Home, Beckley.
To order memorial trees or send flowers to the family in memory of James Jim vaughan, Jr., please visit our flower store.