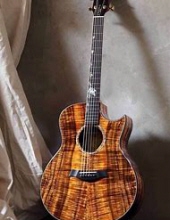 James Alfred Tate, 69 of Maple Fork passed away Monday, May 17, 2021.
Born November 29, 1951, in Beckley he was the son of Donald Tate and the late Margaret Shelton Tate.
James was a salesman for Beckley Home Show. He loved fishing and spending time with family. James played guitar for over 50 years and was one of the best Beckley has ever seen.
In addition to his father, he is survived by sons, Joseph and his wife Stephanie and James, Jr. and his wife Emily; grandchildren, Savannah, Jack, Alex and Reina.
To order memorial trees or send flowers to the family in memory of James Alfred Tate, please visit our flower store.