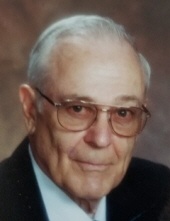 Herbert Henry Milam, 91, of Lester, ascended his stairway to the Lord on Tuesday, November 12, 2019. He was born October 19, 1928, in Wyco, Wyoming County, WV. He was the son of the late Henry Thomas and Emazella (Della) Whitt Milam.
Herb was a member of the Lester First Church of God. He served the Lord in many different capacities, starting in the early 70's, including: Youth Pastor and Associate Pastor, Lester First Church of God, Radio Evangelist with the “Wake Up to Truth” radio broadcast on WJLS, interim Pastor for many churches including Midway/Welch/Corinne/Mullens First Church Of God. He also delivered many messages at various churches as he was called by God. Herb enjoyed serving the Lord in whatever capacity he was called and often used humor in delivering his messages.
Herb worked in the coal industry in many different positions, from Belt Cleaner to General Mine Foreman.
Herb was preceded in death by his brothers: Horace, Carl, Thomas, James, Jesse, Earnest (Casey) and Drew (Jack) Milam and sister, Delores Rhinehart, and two Great Grandchildren, Skyler Taylor and Austin McCafferty (whom he is already spoiling!)
He is survived by his loving wife and lifelong companion of almost 70 years, Lorena Mae Cochran Milam; daughter, Rhonda Canterberry (Kevin); sons, Barry Milam (Jennifer) and Randy Milam (Sharon), Grandchildren and Great Grandchildren, Elain, Kevin, April (Jon), Heather (Jerry), Justin, Warren, Caiden, Devin and Cole.
Herb brought great love and joy not only to his family, but to many who were blessed to have known him. He had a great sense of humor and loved to make others laugh. He also loved music and studying the Bible. He enjoyed playing the guitar and singing. He enjoyed teaching others how to play the guitar and encouraged many to play and sing. He loved watching and playing with his grandchildren and great-grandchildren. He enjoyed sharing his great knowledge and many talents with family. He enjoyed working around his farm, especially the garden and livestock, and fixing nearly anything that was broken. He enjoyed talking about his childhood and growing up in Wyco and Matheny, playing softball for Copperston, working for Williamson Supply, playing music at lunchtime on the Pineville Radio Station. He loved spending time on the river at his camps and his hunting properties. He was a strong patriarch of his family. He was a great father who always took care of his family, doing his best to teach and guide them. Herb impacted many lives and will be sadly missed by not only those mentioned above but also by a great number of Nieces, Nephews, Cousins and Friends.
Please join us in our Celebration of Life services, remembering and honoring Herb, at 1 pm, Saturday, November 16 in the Calfee Funeral Home Chapel with Pastors Dale Birchfield and Tom Milam officiating. Music by Teresa Payne and Vicki Birchfield. Pall Bearers: Kevin Canterberry, Justin Milam, Jon Taylor, Jerry Flora, Darrell Payne Jr., Seth Long.
Burial will follow in Blue Ridge Memorial Gardens. Friends may visit with the family one hour prior to the service. In lieu of flowers, to continue Herb's ministry, through Tom Milam, Herb's nephew, donations may be sent to: Faith Baptist Church (in memo put: Printing Ministry, for Herbert Milam) 3794 Oleander Ave., Ft. Pierce, FL. 34982. Tom and his wife Linda operate THE PRINTING MINISTRY. Their ministry prints tracts and books for missionaries around the corner and around the world! Tax receipts will be issued upon request.

Arrangements by Calfee Funeral Home.
To order memorial trees or send flowers to the family in memory of Herbert Henry Milam, please visit our flower store.