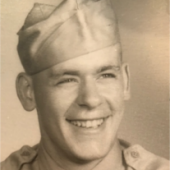 Harold Owen White, 84, of Beckley, formerly of Mullens WV, passed away peacefully in his sleep on February 19th, 2018 at the Bowers Hospice House, Beckley WV.

Harold worked for Norfolk & Southern Railroad for 46 years as an Engineer. He served his country in the United States Army as a Paratrooper from 1953 to 1956.
He was a member of the Mullens Masonic Lodge.

Harold White was a loving father, grandfather, and friend to many. He devoted his life to being a wonderful provider for his family. He was a hard worker who set standards for his children through his work ethic while working with the Norfolk & Southern Railroad or any other project he took on. His favorite pastime was spending time with Kim, his family, and grandchildren. He loved watching sports and sharing stories with his friends and family about his long career on the railroad.

Harold had a personal relationship with the Lord and had often discussed this with his family in preparation for joining his wife. He took every opportunity he had to let the people in his life know that they were loved and appreciated.

In lieu of flowers, donations can be made to Bowers Hospice House, 454 Cranberry Dr., Beckley WV 25801.
To order memorial trees or send flowers to the family in memory of Harold O. White, please visit our flower store.