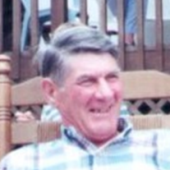 Harley Roscoe “Jack” Weese, 86, of Midway, WV, passed away Thursday, November 17, 2016. Born March 18, 1930 in Grantsville, WV, he was the son of the late Clifford and Ethel Collins Weese. In addition to his parents, was preceded in death by his wife, Elsie Marie Weese in September, 2016; sisters, Betty Hiler, Shirley Graden, Linda Weese and brother Ralph Weese.

Jack retired from Cabot Gas after 20 years of service. Following his retirement he worked in the shop for Westmorleand Coal at Tams. He also worked with the Sophia VFD and volunteered many hours at the Sophia Little league. During his free time Jack enjoyed working on cars, hunting and fishing.

Funeral services will be 10:00 a.m., Tuesday, November 22, 2016 at Calfee funeral Home, Beckley with Pastor Richard Walker officiating. Burial will follow in the Nobe Cemetery in Nobe, WV. Friends may visit with the family from 6-8 pm Monday at the funeral home.