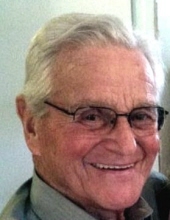 Gilbert Howard Cochran, Sr., 95 of Beckley, West Virginia, went peacefully to Heaven to be with his Lord on March 2, 2022.

Howard, a WW2 veteran was a Naval Motor Machinist’s Mate Third Class, serving his beloved country valiantly in the Pacific war arena. He was a welder and owned his own business for several years. He also worked for Vecillio and Grogan, Tracy Hylton and Joe Ison. Howard enjoying fishing, hunting and flying his plane. Daddy lived his life by this motto - ”Attitude is a little thing that makes a big difference.”

He will be greatly missed by his children with his first wife, Joyce Cochran. They are Sheila Cherney, Jane Cochran, Judy Nunneley, and Gil Cochran, Jr as well as his stepchildren Lynda Vasquez and Bobbi Mathis. Howard was the oldest of seven children, four of which are left to cherish his memory. They are Dollie Dickens, Patty Gano, Frank Cochran and Max Cochran.

Preceding Howard in death are his wife, Peggy Cochran and their son, Jon.

Having a keen mind, Howard was often sought by local historians for his knowledge regarding the history of Beckley. From finance to farming, no one could match Howard. Nothing pleased him more than a bountiful harvest or loving on a sweet baby.

Funeral services will be 1:00 p.m. Tuesday, March 8, 2022 in the Calfee Funeral Home Chapel with Pastor Vondie Cook, II officiating. Entombment will follow in Sunset Memorial Park. Friends may visit with the family from 11:00 a.m. until service time.

In lieu of flowers, the family requests donations be made to the Tunnel to Towers Foundation through their website at www. T2T.org

To order memorial trees or send flowers to the family in memory of Gilbert Howard Cochran, Sr., please visit our flower store.