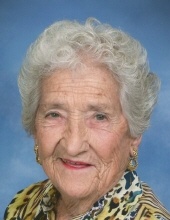 Genevieve “Gen” Alvers, 94, of Winter Springs, Florida passed away peacefully on Saturday, November 20, 2021 after a brief illness. Genevieve was born on January 20, 1927 in Sophia, West Virginia. She lived in Beckley, West Virginia until 1961 when she remarried and moved to Ohio. From the early 1960’s Gen would come to Palatka, Florida every year with her husband, Richard Welsh for “potato season”. Upon his death in 1993, she decided to make Palatka her home. In 1997 she married Earl Alvers who shared her passion for golf. She moved to Winter Springs at the end of 2020 to be closer to family.

Genevieve had a great passion for everything she did in her life and was known for her lively upbeat personality. She was active in her church community and served as the choir director for many years at the United Methodist Church in Wellington, Ohio. She was also an active member of the Presbyterian Church in Palatka, Florida where she also sang in the choir. Genevieve loved being outdoors and could often be seen working in her yard. She was an avid golfer, winning many tournaments in the Lorain County Ohio Golf Association and the Palatka Golf Association. She was also a talented seamstress and loved preparing big meals for family, friends, and neighbors. She went on yearly cruises with her mother and sisters, then with her daughters. In her spare time, she enjoyed playing the piano.

She was preceded in death by her husbands, Richard Welsh and Earl Alvers; and 2 brothers Oscar “Kermit” and Clarence Daniel.

Funeral services for Genevieve will be held on Saturday December 4, 2021 at Calfee Funeral Home in Beckley, West Virginia at 11:00 A.M. with Pastor Vondie Cook officiating. Calling hours will begin at 10:00 A.M. Tentative plans are for a memorial service to be held Sunday January 23 at the Presbyterian church in Palatka, Florida after regular church service.
In lieu of flowers, contributions may be made to the charity of your choice.
Arrangements by Calfee Funeral Home, Beckley, WV.
To order memorial trees or send flowers to the family in memory of Genevieve "Gen" Alvers, please visit our flower store.