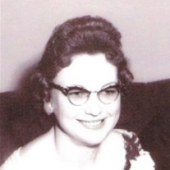 Frances Jeanette Sarrett, 83, of Arnett, passed away Friday, September 23, 2016 at Bowers Hospice House. Born January 14, 1933 in Montcoal she was the daughter of the late Freeland and Virgie Pettry Webb. In addition to her parents she was preceded in death by her brother, Eddie Webb and an infant child.

Frances was a homemaker and took great pride in taking care of her family.

Funeral services will be 1:30 p.m., Tuesday, September 27, 2016 at the Calfee Funeral Home chapel with Pastor Larry Kinder officiating. Burial will follow in Miller Cemetery at Rock Creek. Friends may visit with the family one hour prior to the service Tuesday at the funeral home.

The family would like to extend a special thank you to the staff at Bowers Hospice House and her visiting caregivers; Angie, Regina, Christy and Melissa.

In lieu of flowers the family requests memorial contributions be made to Bowers Hospice House, 454 Cranberry Dr., Beckley, WV 25801.

Arrangements by Calfee Funeral Home, Beckley.
To order memorial trees or send flowers to the family in memory of Frances Sarrett, please visit our flower store.